Ah yes, after some struggle the press is “put to bed”. Actually more correct she is put on her bed. It took a while because one, I was discouraged about the paint issue, and second I had chased around tying to get square tubing to lift the press to get the old storage pallet out from under her. There were two misfires where I bought material of too small a cross-section, and then I was waiting for the four foot length of 2″ square tubing to come into Princess Auto as promised – and that never happened. So I finally took the time and went to a proper metal supplier in the industrial area and got two 4 1/2 foot lengths cut. That made the job almost easy. If you look at the pictures I put both lengths under the very bottom frame. In that cut-back in the cast iron frame – between the feet formed in the side castings there is not all that much room sideways. So I kind of predicted the lift would be a bit tippy, that’s why I closed the press and tied it up, getting the center of gravity more to the middle. I have a little 2000 lbs bottle jack, and with some chopped up 2×6″ (and some 1×4″ required because it gets really wobbly if you try to lift 1 1/2″ at one time). As you can see it worked fine, just don’t plan on leaving a press in that position unattended.

In the above picture the press is suspended by the two 2′ x 2″ square tubing pieces on the wood block piles on either side. It’s not that obvious because I did not lift any more than half an inch higher than required to slip the timbers in place. 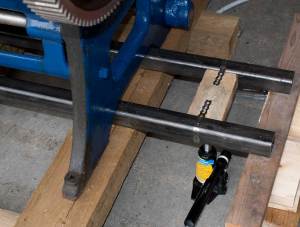 Here is a better angle to show the spreader block I decided to fasten in place. The opening between the feet formed by the cast side panels of the press frame is not that wide and I was concerned the very smooth outside of the square tubing could slip (or roll) during the jacking procedure.

Here the press is finally put to bed.